The remarkable discovery of the remains of King Richard III under a car park in the centre of Leicester captivated the nation. In this new tour we discover the real story, with visits to the King Richard III Visitor Centre. We step back in time to 1485 at the Bosworth Battlefield Heritage Centre where we explore the Battle of Bosworth, the death of King Richard III and the unlikely victory of Henry Tudor. We also find out the link between the king and space exploration at the fascinating National Space Centre.

Enjoy a relaxing journey to Leicestershire. In the afternoon we visit the award-winning Bosworth Battlefield Heritage Centre, a fun and interactive experience filled with links to history, science, and English.

This morning we visit the King Richard III Visitor Centre where the remarkable story of the search for the King is told. The centre is built over the actual location in the council car park where the remains were found. We explore the series of events which led to Richard becoming King in 1483, the events around the Battle of Bosworth in 1485, and the different scientific and archaeological methods used to research, excavate and verify the remains of the last Plantagenet King of England.

In the afternoon we visit the National Space Centre, which has six galleries and is the UK’s largest planetarium. The semi-transparent 42 metre high Rocket Tower at the National Space Centre is home to Blue Streak and Thor Able rockets, and can be seen from any route into the City. This iconic tower is clad in high-tech ETFE “pillows”, and was designed specially to house the Centre’s largest artefacts.

We leave Leicester and start our journey home. 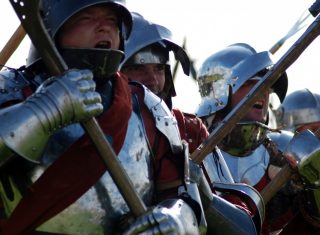 Speak to our Sales Team

Greatdays offer a trade only booking service for coach and tour operators or professional group travel organisers and we can provide single or multiple elements of a holiday.

Greatdays are able to offer a complete tailor-made booking service for group travel organisers with the help of one of our friendly consultants to assist you through the booking process.